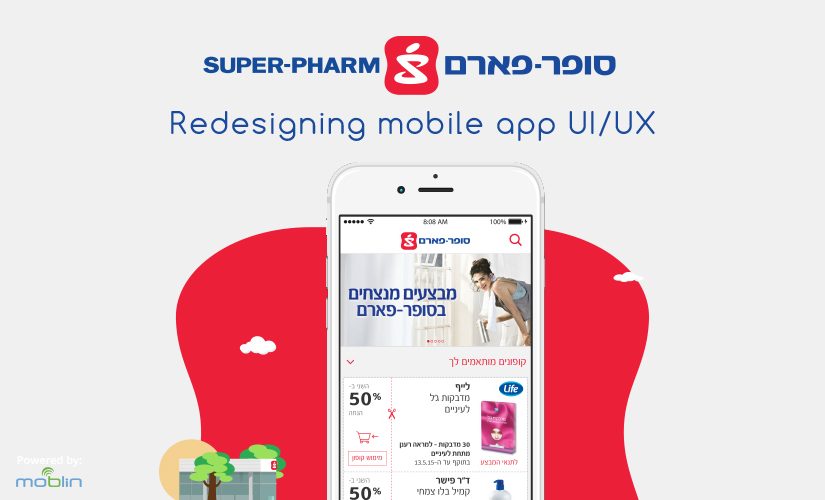 The most successful retail app in Israel, with over 2.2M Downloads and the extremely high usability rates. The results, after about a month from launch), were amazing: Almost 300% increase in usage – More people are creating shopping lists through the app and more are using coupons.

Superpharm is the largest pharmacy chain in Israel. It’s app is the most successful retail app in Israel. With over 2.2M Downloads and the extremely high usability rates. 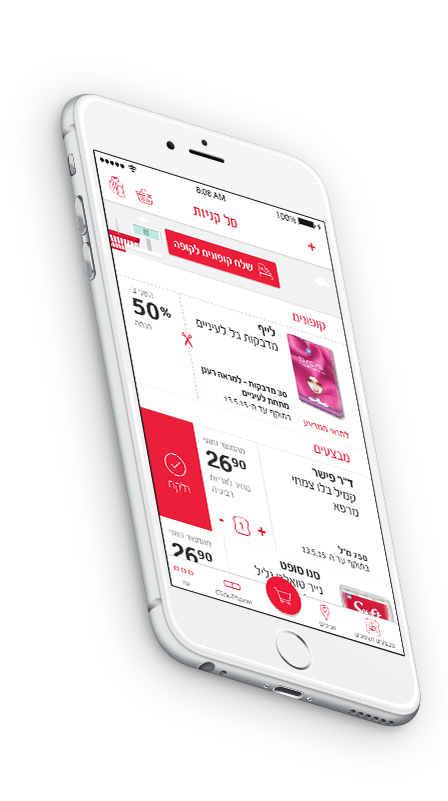 Five years ago, when Lion David (Head of Wild solutions studio) was working at Moblin, He designed Super-Pharm’s retail app. The app went on to become the most downloaded retail app in Israel, with over two million downloads (as of October, 2016), an unheard-of level of adoption for this type of app in Israel. When Super-Pharm decided it was time to update the app, Moblin subcontracted “Wild Solutions” to create the design once again.

The results (after about a month from launch):  Almost 300,000 updates! and about 20K more downloads.

Of course, as with every major change, some users have had a hard time adjusting to the change, but overall the audience is embracing the new look and experience and we are looking forward to the next step in the evolution of this great app. 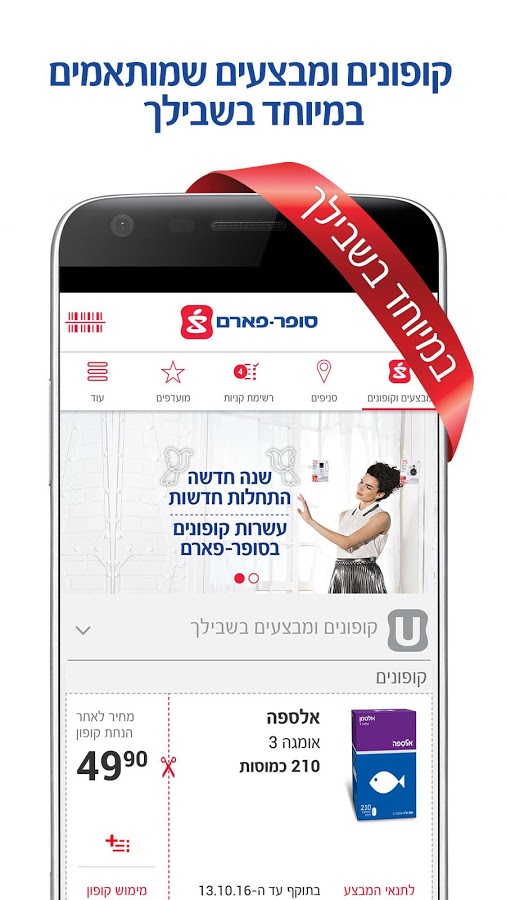 Besides being a good opportunity for a visual refresh, the redesign project was also a chance to improve certain features that with hindsight we would have implemented differently in the original app and add a few more features too. 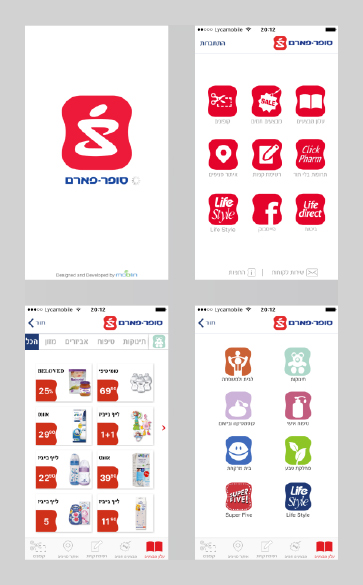 We spent three months in the planning stage, and two months on the design, going through 13 rounds of wire-framing. We did a complete remapping of the entire app, taking note of the features the client wanted to add or improve – primarily related to creating a personalized user experience. We ended up with a simplified, flatter interface with a scrolling list of coupons and offers as the main feature, and three other features embedded in a bottom bar: shopping list, store locator, and click-pharm – the online pharmacy counter.

Besides some basic functionality features such as letting users create shopping lists or find nearby stores, the primary use of the app is to show users what deals are available, presented in the form of scrolling list of coupons and offers. One of the biggest changes we made in our redesign was to emphasize the centrality of this feature, so that in the new version the list appears right when the app is opened, without users having to select it from the menu. 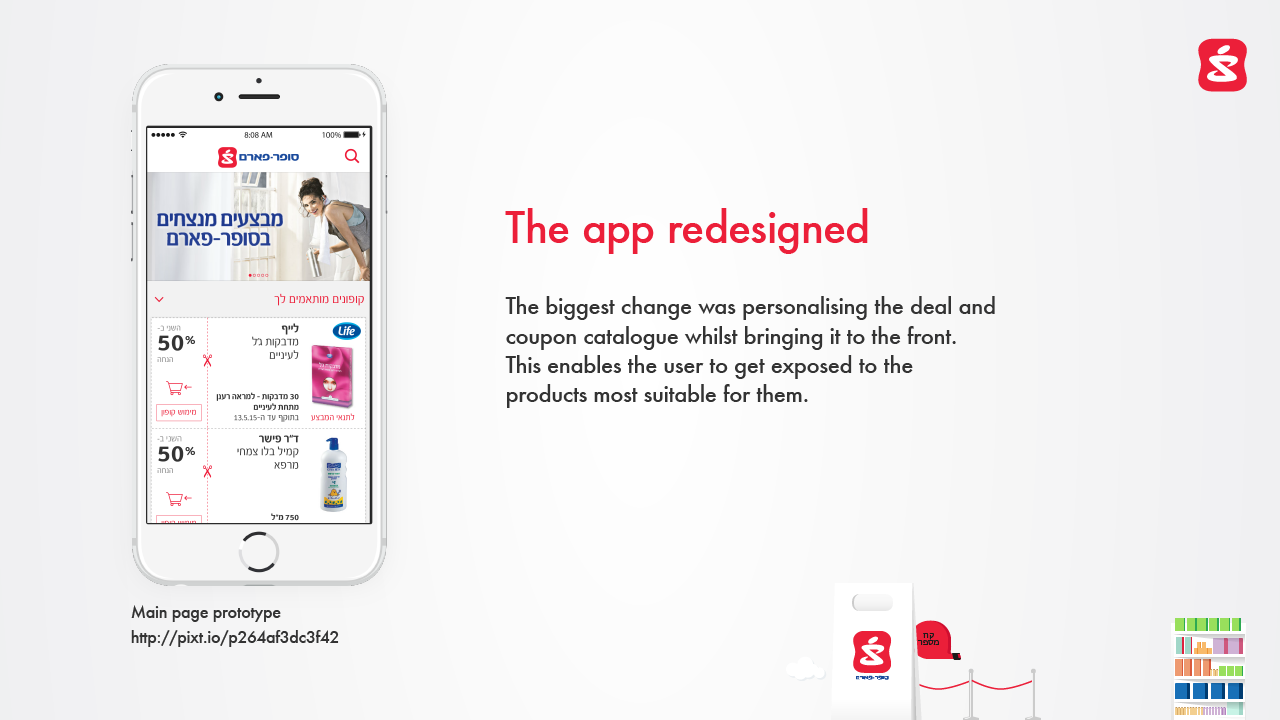 We added slight visual differentiation between coupons and offers as well as two types of boxes for regular and highlighted items. The list is also broken up with in-app ads for Superpharm’s own products. The benefit of displaying the ads in that location is that they appear while users are in a higher state of focus and have a high degree of relevance to them.

One of the main improvements the client required was to have a more personalized and targeted user experience. Nowadays, users expect to receive an experience tailored to their particular needs and interests, and a presenting them with a list of coupons and sales that are irrelevant to them risks losing user engagement with the app. To achieve this increased relevance we segment the customer base into eight personas, and users are asked to indicate their interests and preferences. 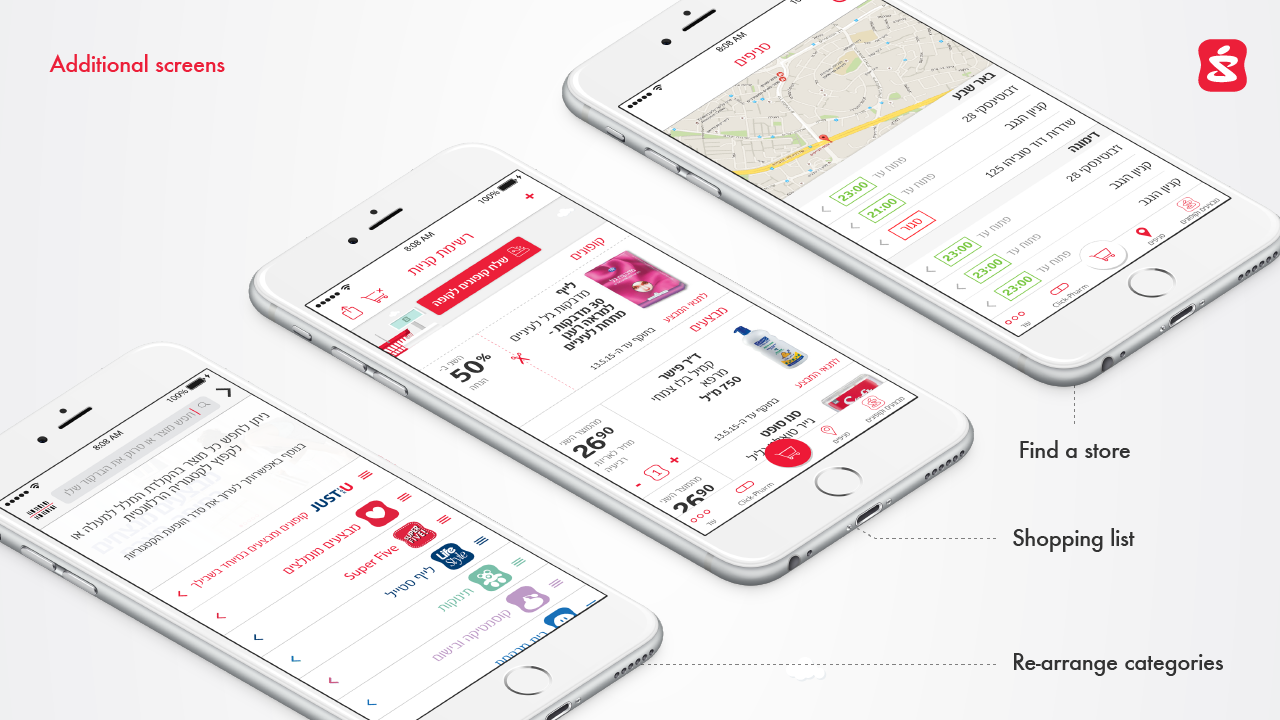 In the planning stages we looked at what other retail apps are doing. We liked the simplicity and ease of use of Any.do, the to-do list app, and modeled the shopping list feature around it. The retail apps Lush and Asos were our source of inspiration for the coupon list. The main focus is on creating a highly-appealing shopping experience, giving prime focus to the picture of the item, with text and prices receiving less prominence.

There were also some of the more minor, but still notable changes. We implemented differentiated experiences for IOS and Android versions of the app. We also added some small animations that appear for different user interactions that create a more immersive experience. Lastly, we improved the ability to redeem coupons from within the app at the checkout in the physical store, a feature that existed in the previous version but that did not function as smoothly as it needed to.